New Mexico for the holidays

I'm back in New Mexico, and feel blessed to have had some snow for the holidays! 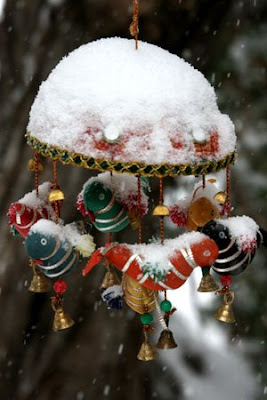 Not much snow, but enough to have made it a white Christmas. Enough to have put a damper on sound. Enough to make it appealing to build a fire in the kiva fireplace. Enough to turn the lines of trees into Japanese etchings... 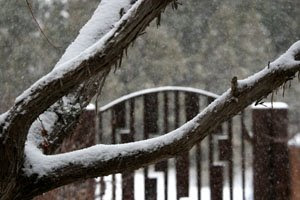 Or the lines of a chair into an abstract... 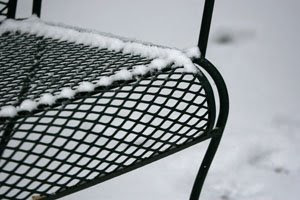 Every year I come here for solstice. My women friends gather for a pot luck and we usually do a gift exchange. You know the kind - where each person brings one gift and you get to pick the one you want? Well, this year it seems that everyone is fed up with "things." No one wanted another thing. So someone came up with the brilliant idea of doing a poetry exchange instead. The poems had to be positive, hopeful, possibly about renewal - whatever. They just couldn't be downers or political.

This year I drove. I decided to take the rest of the year off and spend it here, and with that much time it makes sense to drive - especially with gas prices being so low these days. When I drive in the winter it makes sense to go through Tucson. I have a friend who lives there so I usually stop there for the night. It's about 6 hours from San Diego to Tucson, and about another 6 from Tucson to Albuquerque. I was lucky that I didn't get any weather. There was snow on the ground in southern New Mexico, but none coming out of the sky - just one of the most sensational sunsets I've seen in my life. (Since I was driving - no photos!) It was 360 degrees of spectacular, with golds, oranges, pinks, mauves, blues and grays all transforming into each other.

So now solstice and Christmas are over, and the snows have passed, though we still have some on the ground. The sun is blazing in a brilliant blue sky and there's ice melting and dripping off the roof. My family is due to arrive this evening. We will celebrate New Year's Eve together. I have been able to cook a large pot pork and red chili and eat that for the majority of the time I've been here. In the morning I heat it up and put two eggs over it. In the evening I heat it up and mop up the juices with a soft flour tortilla. 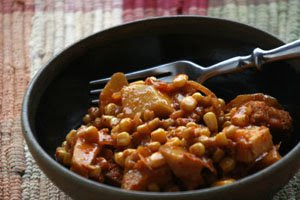 There is no recipe for this dish. I simply took an onion, cut it up and put it in a pan with garlic. When it was soft (about 5 minutes), I added some cubed pork, some cut up potatoes and red chili. I bought this red chili at the local grocery store. If you want red chili, the best usually comes from Chimayo, New Mexico. (For green, it's Hatch, New Mexico.) It comes in a plastic tub, like the ones margerine comes in. I dumped probably 5 or 6 big tablespoons in the pot (I like mine hot!) and stirred, lowered the flame and covered. Oh yes, I put in some water. About 25 minutes later, I opened a can of corn (Yikes! Don't fire me for using canned corn - it's winter and I didn't have any frozen!), strained out the liquid and dumped it in. Stir, cover and let simmer another 5 minutes or so until the corn is warmed up.

And, as my niece Rachael would say over at Fresh Approach Cooking, taste the joy. 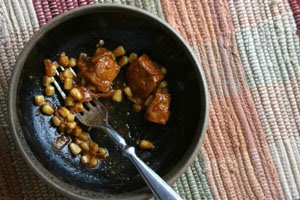 Oh, and if you're curious about what poems I brought to share, I brought the Ferlinghetti poem that I posted here back in May. I also brought everyone's favorite Mary Oliver poem -

You do not have to be good.
You do not have to walk on your knees
for a hundred miles through the desert repenting.
You only have to let the soft animal of your body
love what it loves.
Tell me about despair, yours, and I will tell you mine.
Meanwhile the world goes on.
Meanwhile the sun and the clear pebbles of the rain
are moving across the landscapes,
over the prairies and the deep trees,
the mountains and the rivers.
Meanwhile the wild geese, high in the clean blue air,
are heading home again.
Whoever you are, no matter how lonely,
the world offers itself to your imagination,
calls to you like the wild geese, harsh and exciting -
over and over announcing your place
in the family of things.

I wish every one of you a healthy, prosperous and joyful new year!

Happy New Year. Sounds like you had a wonderful retreat and non stressful Christams. Thats the way it should be. All the best for the coming year.

Thanks, Courtney, and a Happy New Year to you, too. The coming year promises to be the beginning of a much needed relief from the last 8. My spirits have been buoyed by the events in our country, and hope that the whole world will benefit from our changes.

I love the photos - they are so artistic! And here is to a happy and stress-less New Year to you!

i just love your warm delicious blog! your photography is stupendous. i really get the feeling of being in new mexico.
and geese are very special to me, your posted poem is a wonder.

it does seem to be a year for change. good changes.

say, i wonder if you have room to post my blog, planting cabbages (cabbage huevros, maybe?) is about my adventures, culinary and otherwise in writing my novel, city of ladies. it begins in france but ends sicily - but has bread as a central feature and story line.

I stop by here far too infrequently, Toni [or any of the other great blogs in my blogroll, for that matter]. But every time I do, I find something absolutely wonderful. Happy new year, my friend.