A Winter Soup, A winter poem

This has been a strange winter. I drove to New Mexico for the holidays, because unlike most southern Californians, when the calendar reads “December”, I want it to be cold.Perhaps because I grew up on the east coast, I have a thing about seasons.When I was a kid I used to love watching the maple tree in the front of the house turn red each fall.It was the first tree in the neighborhood to do so – usually in the very beginning of September, and its flaming color stood out against all the other trees, which were still wrapped in their summer green. Here in San Diego, trees don’t even begin to think of changing color until sometime in November.This year I think it was near the end of November.
Fortunately for me, gas prices had gone down, so the drive to and from New Mexico was pretty easy. It was well past the time when the aspen trees glitter with gold. It was snow time, when the world turns white and silent. And it is that silence which is central to the gift that winter brings. The silence which comes from the world being blanketed in snow, when the loudest sound you might possibly hear (or not) is that of a distant woodpecker working on a tree, is the perfect antidote to the cell phone-radio-car horn-jet plane-cement mixer crazy world we think of as real life. 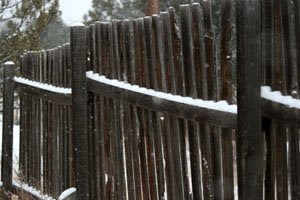 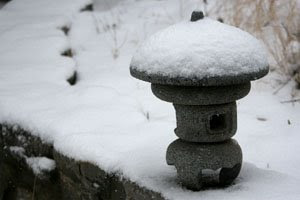 Driving back from the higher altitudes and descending into the lower coastal regions, I knew the temperatures would be warmer, but the nights have been cool and the daytime temperatures have made it possible to wear a sweater or light jacket and feel comfortable. Now all of that is changing. They are predicting that the temperatures will go up to around 80 degrees inland.80 degrees???That’s obscene! This is January! This is National Soup Month – or so it should be. This is when we should be wearing layers of clothes, and burrowing in at night with a good book and a bold soup. So I decided that I would ignore the temperatures and go by the calendar. After all, no matter what the temperature is, they day/night cycle still speaks of winter. We are past the solstice – past the shortest day of the year, but it isn’t palpable yet. So the nights are still long, and my books are a little thicker than the ones I generally read in summer. I have a longer time in bed to read at night, after all. I’m currently reading “A Suitable Boy” by Vikram Seth – a vast, engaging Indian saga, perfect for long winter nights. And the perfect soup? I found it on a blog I recently discovered called What I Like. I liked the title of the blog – simple and open ended. And when I read the recipe for the soup, it made me feel warm like a pair of woolen socks. It’s way simple to make, and of course I couldn’t possibly follow the recipe exactly. I’ll give it to you as written, and then I’ll explain my variations on the theme. 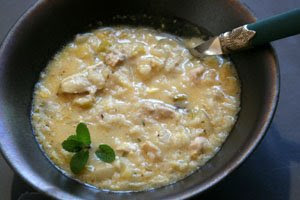 1) Place chicken in a pot large enough just to contain it. Add water to cover by 1/2 inch. Add one teaspoon salt. Boil over high heat. Skim any foam from the surface, turn the heat to very low, cover and simmer for 3 minutes. Remove pot from heat and let stand, covered, for 30 minutes. 2) Meanwhile, quarter and slice the onion. Trim and discard the dark green tops, and discard the leathery outer layer from the leeks. Slice through each leek vertically and was them well, making sure you get all of the dirt out from between the leaves. Slice them crossways into thin half rounds. Wash and thinly slice celery. 3) Choose a heavy bottomed soup pot, preferably 4-6 quarts, and add the olive oil. Warm it over medium-low heat, and then add the vegetables. Stir to coat with oil, then cover the pan and cook, checking vegetables and stirring frequently, until meltingly tender, about 10 minutes. 4) Remove chicken from pot and let cool. Add cooking liquid and the rice (if using Asian rice, be sure to rinse first) to the vegetables along with the additional 4 cups of broth, and cook for about 30 minutes, tasting for salt and adding it, along with pepper, as needed. Meanwhile, shred the chicken. Add the chicken shreds to the pot once the rice is cooked. 5) In a medium-sized pot, mix together the cornstarch and 1/4 cup of cold water. Add the egg yolks and yogurt. Bring slowly to a simmer, stirring constantly in ONE direction. When the mixture is thickened, add it to the soup. The soup can now be served. 6) In a small frying pan, melt the butter. When the foam has subsided, add the dried mint and cayenne pepper. Fry for a few seconds, until fragrant. Garnish each serving with a drizzle of the mint butter (I personally just mix it with the rest of the soup...I don't even have a dining table so feel a bit ridiculous garnishing things). Note: This soup is great reheated the next day, but don't boil it or the egg mixture may separate and curdle. 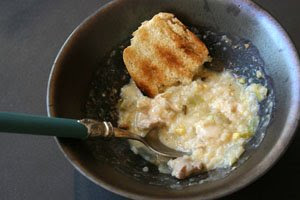 On a practical level, I only had one small container of yogurt, but I did have some buttermilk. I used a 50-50 mixture of the two, and I loved the tang it gave. Didn’t have cayenne, but I got pretty bold with my Hungarian paprika and that worked fine. Also, I didn't shred the chicken, I chunked it, as I prefer having something to sink my teeth into.

This soup, as written, is a soup of comfort. It's the kind of soup you'd want to have when it's January and you're coming down with "IT". But as I ate it, I realized that this was a variation of one of my favorite soups - Avgolemono - that Greek comfort soup with egg and lemon. So if you've actually got "IT", don't have yogurt or mint but have lemon instead, don't be shy. The acid of the buttermilk and yogurt can easily be replaced by the acid of the lemon. You can also substitute dill for the mint if that's what you've got. And this recipe definitely needs salt and pepper. I used a liberal sprinkling of kosher salt out of habit.

And here is a poem for winter:

by William Carlos Williams
Snow:
years of anger following
hours that float idly down —
the blizzard
drifts its weight
deeper and deeper for three days
or sixty years, eh? Then
the sun! a clutter of
yellow and blue flakes —
Hairy looking trees stand out
in long alleys
over a wild solitude.
The man turns and there —
his solitary track stretched out
upon the world.
Posted by Toni at 2:37 PM

Again - a word on your photos: magnificent! You've got a great eye, Toni!

And what a wonderful name for soup - Avgolemono. I reckon that 'lemono' stands for lemon in greek, isn't it? Avgolemono...sounds like a poem!

I'm astonished to learn the books you read in winter are thicker than those for summer! I never gave it a thought that even books we read are season-related! That's so interesting...

Odd, I never think of New Mexico with snow.The soup sounds very comforting and I love anything with some tang and bite. This is my favorite time to just bury myself by the fire and read.

Anya - It seems that with shorter days and longer nites, I just want to hunker down and get lost in a book until spring arrives. Then I need to be outside more, and gardening or hiking or photographing - but less reading. So the books need to be shorter.

What a lovely post, Toni. The soup looks good - I'd like it, I think. And I love the visuals and the poem. Perfection!

Thank you so much, Mimi!