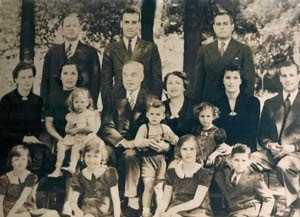 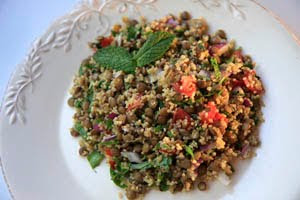 My husband used to say "start with what you've got in the fridge." As long as you've got a well stocked fridge, this works well. I learned back in those days to keep a pantry and fridge well stocked, so I had almost everything I used in this salad - quinoa, lentils, cherry tomatoes, garlic, vinegar and olive oil. I had a necessity for arugala that day. Don't know why, but sometimes these things just happen. Whole Foods is a short distance from my house and provides me with a small amount of exercise when I walk there. I have parsley and mint growing in my garden. So what I ended up with was a kind of variation of tabbouleh, but slightly more substantial with the addition of lentils. Since both lentils and quinoa cook quickly, this dish was a breeze to put together. A lot easier than a slide show, but satisfying, and simple. Because these are the good old days.
Posted by Toni at 10:36 AM

An interesting post, Toni. Perhaps things were a little simpler back then, but I think we all have a tendency to oversimplify the past. If anything, they faced many of the same problems we do today, but had fewer resources to deal with them. But yes, a number of the "improvements" in our modern lives maybe aren't such improvements after all. Fast food being a perfect example. Again, a nice post. I'm glad you've resurfaced, Toni.

"The Way We Were." I think I know what you are feeling with looking at pictures from the past. As far as television goes, I can tell you that my Father came home from WWII as a decorated Marine with training in communications and became the first and only TV distributor and radio repair shop in our small town. It was 1950. He was the communication guru of his time, and the town loved him for putting up their antennaes so they could watch the Ed Sullivan Show. You are doing a beautiful thing for your family by documenting the history. I love your style.

Great post, Toni! Miss stopping by...need to make sure I get by on the regular...

This salad has my name written all over it! Love love love quinoa! *Hugs*

Terry - I think that people all had the same kinds of problems in the past as we do today, but we didn't have quite as much information and input as we do now. Perhaps that made solving those problems simpler, as the choices were fewer?

Penny - How great about your dad being the communication guru of his time - love that story! And thanks for helping to clarify the timing of TV's entrance into our lives. It's pretty much what I thought it was.

The other day, we were looking through some packed boxes in our barn and found photo albums from trips we took to Asia in the 1990s. We sat and looked through the hundreds of photos, recalling adventures of days past. While I love technology and what it can do -- where would we all be without digital photography? -- I miss the "old" days.

Excellent post, Toni. Once you start going back, it is addictive. You learn so much about yourself. That salad sounds addictive, too. I'm looking for something like that to take on a trip with me so I have GF foods on hand.

Lydia - I get it. I have loved having the actual, physical photos in my hands, knowing that they were created when I was a small child, and that they were tucked in a drawer in my parents home. However, many of them have degraded since then, and I'm glad I've had the chance to digitize them.

It is amazing the stories that you can write just looking at one photograph. You can write about each person and if they have gone beyond, you stare a little longer at the photograph and wonder about life itself.

I agree, Cynthia. It's amazing how rich and deep our histories are when we stop long enough to look and linger over the photos...

A delicious sald...and yes, I agree that there was a time that life was simpler and more importantly...slower. But as Terry B. blue kithcen says...maybe we are oversimplifying. I remeber my mom saying exactly what I'm saying...life was much simpler way back. But still, I do wish for life to be on the slower side.
A great post.
ronelle