OK, OK.... So I know I've been out of touch for a while. I honestly don't understand how the speed of life increases, but it obviously does. Is there a physicist out there who reads food blogs who can explain this phenomenon to the rest of us? In simple English? But the fact of the matter is that between the inauguration, which seemed to have taken up everyone's time in my circle of friends, to my birthday a week later - all that time was a blur. And then I had a birthday reminiscent of the way we used to celebrate in New Mexico. Translation? It lasted for about a week. And then I got sick.

Then I found this photo I took of a chicken mole dish I had made before my personal "crash". I was inspired to make this dish after eating dinner at a friend's house. He makes some of the best mole I've ever eaten. Perhaps it's because he's Mexican, but I don't think that's it. All moles are different, and some are better than others. My friend Luis' is spectacular. I asked him for his recipe and he smiled at me and told me that it was simple. Yeah, I thought - get out the mortar and pestle and start grinding seeds..... 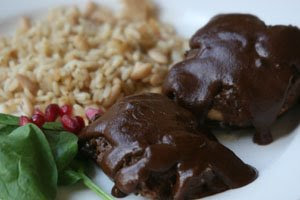 But no! He started with a product I was very familiar with - Dona Maria's mole sauce. 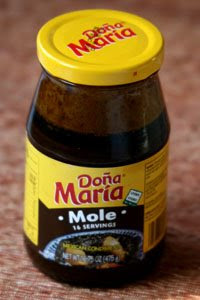 The most welcome change in this sauce is it's packaging. It used to come in a jar with a lid you had to pry off. Once you pried it off, there was no way to truly seal it back on. They obviously figured it out, because the packaging now makes sense - just screw the lid back on and store in the fridge.

But Luis' mole didn't just come out of this jar. What he did was to boil some chicken first with a little marjoram. In a separate pan he added about a heaping tablespoon of peanut butter plus a tablespoon of sugar to the mole sauce over low heat. Once those ingredients were combined, he thinned the sauce out with the water from the chicken he had boiled. And the rest of the water from the chicken? Well, he used that to make rice, of course.

If you're looking for something quick but tastes like you've slaved over that hot stove all afternoon, this is your answer. You can make it in the middle of the week when you get home from work, and you'll be sitting down to dinner in less than an hour. Enjoy!

And I seem to be on a path these days to include poetry in my blogs. I found this one recently and thought the title of it fit the occasion:

by G. E. Murray
Days of the ferret, a sweet fever.
Someone is walking through the sun
With my tongue on a leash.
Say “Ahhh.” Thank goodness,
It’s not diabetes or the Bolivian Rot.
This morning I am a cross
Between lefthandedness
And pointblank rage.
The sun leaks like soft ice.
The infection deepens . . .
My eyes dissolve
In a closet of heat.
I become 4,000
Yellow flowers, chirruping.
O the clich� of a trek into the bowels of China.
O the night that zings like a harpsichord factory!
O gorgeous sun limping in the frozen dusk.
O candy wrappers stacked like bricks!
Snow growls on my roof.
The infection deepens . . .
A day on fire
Placing real rabbits
Where my mouth should be.
I am several kinds of tigers.
I am a confectionary treat.
This fever fills my sleeves
With pearls of honey drops.
Am I too strange to bleed?
I’m behind myself
With a knife and fork,
Revolving on a skewer.
I am wild with grief
As greasy children
Reach deep into my fever
To scoop out their revenge
In double-dips . . .
Come off it, kids.
Next week, I’ll be raining
On the iron road to Malta
And perfect health, melting
Like sugar in the mouth of the Orinoco.
Posted by Toni at 5:48 PM

Welcome back, Toni, and belated Happy Birthday. I did wonder how you were faring!

Good to have you back on the blog scene.

Wow, Mimi - Thanks! I am feeling better now, even though that means that I have been taking antibiotics. Oh well....sometimes herbs, water and rest just aren't enough.

Oh Toni, Happy Belated Birthday to you! I am glad you are back, though a little 'scarred'. :)

Mole - what can I say? It seems to pervade every corner of the world -in a good sense, of course! :)

Well it sounds like you had a blast for your birthday, that's very good!

Always nice to see you.

Thanks, Anya. And I was amazed to find that you have it in Moscow! Shows me that when something is good, word gets around!

Yes, Cynthia, I did! And it's always good to see you here as well.

I've used this mole sauce, too; they sell it at Whole Foods here in Rhode Island. Hope you are feeling better every day -- these birthdays can be rough!

Thanks, Lydia, I am feeling better. Shows you the healing power of mole!