The Healing Power of Potato Soup 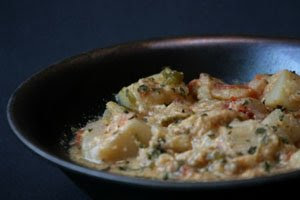 Back when I was a girl, if I ever felt sick my mom would make me tea and toast. I loved the toast. But the tea didn't cut it for me. I have to say that my mom was a coffee drinker, and didn't really know much about tea. In those days, it was a bag of Lipton steeped in water. I don't recall now if there was lemon served with it or not, but the point is I didn't like it. In fact, for years, the smell of tea would make me nauseated. Kind of a reverse Pavlov's dogs. Or something.

Now that I'm on my own, I have found what works for me - both in terms of tea as well as in terms of what makes me feel better when I'm sick. When it comes to tea, I drink it the way they do in India - boiled with milk, some tea masala and a little sugar. In fact, at this point in my life, I drink that every morning. I don't prepare coffee in the morning anymore. I've turned into a tea drinker.

And when it comes to foods that make me feel better, while I do still love the smell of toast (it's one of those "comfort smells"), I have found that soup is what I want when I'm feeling under the weather. But I can only stand so much chicken soup. After a while, I feel like I'm about to start clucking! When I came down with the flu a couple of weeks ago, I started out by sleeping for a few days. When I woke up, I wasn't really hungry, but my mind told me that it would be a good thing if I ate something. I don't remember what I managed to forage for, but whatever it was, I had a couple of bites and that was it. I knew I had turned a corner when I forced myself to make a chicken soup. (Only had a few bites of that, too, but at least I managed to stand upright long enough to accomplish it!)

How did I gauge when I was really on the mend? When I made a potato soup. Potatoes are another comfort food. I don't care what the carb police say - potatoes are natures way of nurturing you back to health. And this soup is simple enough to be made with stuff you've probably got already in your pantry. The only thing I had to scrounge from a neighbor was a can of evaporated milk. (Fortunately, I have neighbors who like to cook!) This recipe isn't a recipe. It's one of those "Open the fridge and the pantry, look at what you've got in there, pull it out and make soup" kinds of things. So I have no measurements.

I started by sauteeing some onion and garlic in olive oil. While the onions were browning, I peeled potatoes (I used a couple of russets and a couple of Yukon Golds, 'cause that's what I had), halved them, and then sliced them about a half inch thick. Add them to the onions and continue to sautee, stirring regularly. Open a can of tomatoes and quarter them if they're whole. Add the tomatoes along with the juice from the can, along with some chicken broth. (I used the rest of the broth from the chicken I had boiled for the mole.) Add some salt, and water if needed.

While the soup is simmering, put some anaheim and/or poblano chilis in the toaster oven and broil them. I had only one of each. If I had had 2 of each, it would have been better. I have a friend that makes it with 6 Anaheims and it's terrific! You get the idea - these chilis are fairly mild, so you can add until it has enough of a kick for your taste. You're also adding a good source of vitamin C, so don't be shy!

When the chilis have broiled to the point where the skin has separated from the meat of the chili, they are ready to peel. Remove the seeds before cutting them and adding them to the soup. (Remember to wash your hands afterwards, and whatever you do, DON'T touch your eyes!) Add some herbs. I had oregano, but marjoram works well. I think I also added some thyme. Use what you have on hand, and what your nose tells you to add. You can also add a bay leaf.

When the potatoes are almost soft, add a can of evaporated milk, bring the soup back to hot and you are ready to serve. You can put some grated soft cheese in it at this point. Served with a chunk of French bread, you've got a meal fit for company. And if you absolutely must add some meat to satisfy yourself, chorrizo works well. You can slice and fry some on the side, put some slices in the bottom of the bowl and ladel the soup over the top.

How do you gauge when you're on the mend? What foods do you like when you're feeling under the weather?
Posted by Toni at 9:20 PM

I'm so glad you're feeling better! It sounds like you went down hard. Potato soup has never been my thing, but your version sounds just dreamy. When I'm sick I like to make a version of the Filipino soup Tinola. My old roommate would make it for me whenever I was sick (she'd make it for herself when she was sick too, and I'd cadge a bit then as well).

I've never had potato soup. I must give it a try.

My mother was a fan of soft-boiled eggs.
I make a pot of chili.
Glad you have recovered!

I am so with you about soup being the ultimate comfort food and this potato soup looks awesome. Glad you are feeling better! Nice to see you around again!

Ann - It feels soooo good to be back! I've never heard of Tinola - maybe you'll do a post about it someday?

Cynthia - This is so simple and good, it's worth it!

Katie - Well, I'd never turn down chili, even if I didn't have an appetite!

Jenn - It's a wonderful soup! The recipe comes from a friend of mine who told me the ingredients. I just put it together in my fog state and it worked great!