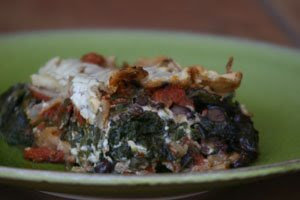 Perhaps I was craving iron. Perhaps it was the color green. I don't know. All I know is that I decided it was time to make a spinach lasagne. I wanted spinach, I wanted it cooked, and I wanted lots of it. Do you ever get that way? You know, craving an ingredient and then building a meal around it? I'm sure you do. We all have, I think.

Now, you have to understand, I'm not Italian. I love lasagne, but I rarely make it. It takes so much work to prepare, and since the cat doesn't eat it, I don't bother. Perhaps there's something about growing up with a woman in the family called "nonna" instead of "grandma" that makes some people more patient when it comes to making lasagne, I don't know. I will make all kinds of meals for myself, which my single friends admire. I know they all think I'm nuts for cooking the way I do. After all, there's always the pre-made stuff from Whole Foods, or the stuff from Trader Joe's. While I've resorted to eating those modern day versions of fast food, I always prefer making a meal from scratch. But lasagne?

But the spinach thing was strong, so I forged ahead. I had a bag of baby spinach from Trader Joe's and Henry's had spinach on sale. I was set. I went to my go-to site for recipes: Epicurious. I used to subscribe to Bon Appetit, and my sister used to subscribe to Gourmet. These days, I prefer to keep the paper consumption to a minimum, my carbon footprint to a minimum, and the trees to a maximum. So epicurious has become my main source, with additions from the various cookbooks I own, and the recipes from the magazines that are sent to my clinic for some unknown reason.

One of the first recipes I came across was Mexican Poblano, Spinach, and Black Bean "Lasagne" with Goat Cheese. I knew I was on the right track. It just leapt off the page, and I could taste it as I was reading the recipe. You know that feeling - how you can just look at some ingredients and just know that they will balance each other out. I often use my nose to tell me this when deciding upon which herbs and spices to use. But in this case it was words on the computer screen, and with each ingredient, my palate began to build a taste picture.

So here, from the screen of epicurious.com, is their version of this lasagne:

For chiles
For tomato sauce
For goat cheese sauce
For spinach filling
To assemble dish
Preparation:

Prepare chiles:
Lay 4 chiles on their sides on racks of gas burners and turn flames on high. Roast chiles, turning with tongs, until skins are blackened and chiles are tender, 4 to 6 minutes. (Or broil all 12 chiles on rack of a broiler pan about 2 inches from heat, turning, until skins are blackened, 8 to 10 minutes.) Transfer immediately to a large bowl and cover with plastic wrap. Roast remaining 8 chiles in same manner, then let stand 20 minutes.

When cool enough to handle, peel chiles, then open flat and discard seeds and stems, wiping with paper towels or dunking in a bowl of water briefly, if necessary, to remove seeds. If chiles taste very spicy, cut out ribs with scissors to make them milder.

Make tomato sauce:
Purée tomatoes with juice, garlic, cilantro, sugar, and salt in a blender. Heat oil in a 10-inch nonstick skillet over moderate heat until hot but not smoking, then add sauce (be careful of splattering) and simmer, stirring, until thickened and reduced to about 1 cup, about 6 minutes.

Make goat cheese sauce:
Gently simmer cream, with epazote if using, in a small heavy saucepan, covered, 10 minutes. If using epazote, pour cream through a fine-mesh sieve into a bowl, pressing on and discarding epazote. Return cream to pan. Whisk in goat cheese and salt and heat over low heat, whisking until smooth.

Make spinach filling:
Blanch spinach in batches in a large pot of boiling salted water for 1 minute, transferring with a slotted spoon to a large bowl of cold water to cool. Drain in a colander, pressing on spinach with back of a spoon to remove excess water, then coarsely chop.

Heat oil in cleaned nonstick skillet over moderately high heat until hot but not smoking, then sauté spinach and raisins, stirring, 2 minutes. Stir in salt and transfer filling to a plate.

Heat oil in cleaned nonstick skillet over moderately high heat until hot but not smoking, then fry tortillas 2 halves at a time, turning over once, until just crisp, about 1 minute total. Transfer tortillas to paper towels to drain.

Spread 1/4 cup tomato sauce over bottom of casserole dish. Arrange half of tortillas on top, then spread another 1/4 cup tomato sauce on top and sprinkle evenly with black beans. Arrange 4 poblanos flat over black beans to cover, then spread half of spinach filling evenly over chiles and drizzle with 1/4 cup goat cheese sauce. Make another layer with 4 chiles, remaining spinach filling, and another 1/4 cup of goat cheese sauce, then cover with remaining 4 chiles.

Bake lasagne, covered with foil, in middle of oven until bubbling and heated through, 25 to 30 minutes.

Preheat broiler. Remove foil and broil about 3 inches from heat until top is bubbling and beginning to brown, about 2 minutes.

Cooks' notes: • Chiles can be roasted and peeled 1 day ahead and chilled, covered.

• Lasagne can be assembled (but not baked) 1 hour ahead and kept, covered, at room temperature. 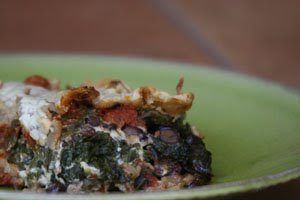 To roast the chilis, I turned my oven on to about 400, put the washed chilis on a baking sheet and popped them in the oven until they were lightly blackened - about 20-30 minutes. This method is a little less labor intensive than the one listed in this recipe. Once they are cool, they're a breeze to skin.

For the tomato sauce, don't bother using fresh tomatoes. Using the good ones from a can yields great results - it's a sauce, after all, not a salad!

I didn't have epazote and didn't miss it. I'm sure it would have been wonderful, but don't go hunting for it unless you're in the mood for the hunt.

The poblanos weren't split in half when I used them - they were in pieces. And I chopped them into smaller pieces. I find it easier that way. Oh, and speaking of poblanos, I was certain that with 12 poblanos, this dish was going to be hotter than Hades. Well, as it turned out, there was no way I was going to fit 12 poblanos into this dish. There just wasn't the room. But even if I had fit them all in, for some reason this dish didn't turn out to be too hot. I was delighted!

And finally -- about those raisins? If they seem a bit weird, don't worry. The sweet plays nicely against the spice. They're an unexpected surprise in this unusual variation of lasagne.

In fact, I just might make this again. It was worth the effort. Am I becoming Italian? If so, can I please wake up tomorrow morning speaking the language?

What have you been craving of late?

Oh my! This looks both really tasty and I know it's healthy!Great idea.

Toni, I love this approach of making all kinds of meals, however elaborate they are, for yourself. This is just right!

As to cravings, I seem to be on a broccoli roll lately. And chocolate of course. It is never out of season! :)

Courtney - It turned out to be quite tasty, in fact. And yes, probably healthy even with the cream!

Anya - Of course chocolate is always in season!!

This lasagne would do it for me -- and I totally get the raisins, to balance the bitterness of the spinach. Love the flavor of poblanos, but sadly nice poblanos aren't that easy to find here.

Lydia - I'd use canned Hatch green chili if I didn't have poblanos. It's worth it!

Oooooooooo spinach is something I try always to have in the frige - the 3 pound bag from Sam's was my usual now they sell it in a smaller box. This has got to make it to our table. Thanks for this one Toni.
We seem to be into Italian together. Are you speaking the language yet - that would be a nice side effect wouldn't it.

Oh, Tanna, if only cooking Italian food would give me the gift of the language, I'd be cooking it daily!!!

Dried fruits and nuts are often found in Spanish cooking, and these ingredients show the influence of Arabic cuisine. Try the Catalan Spinach recipe on epicurious.

GK Chesterton: “The poets have been mysteriously silent on the subject of cheese.”

Voila: www.tastingtoeternity.com. This book is a poetic view of 30 of the best loved French cheeses with an additional two odes to cheese. Recipes, wine pairing, three short stories and an educational section complete the book.

From a hectic life in New York City to the peace and glories of the French countryside lead me to be the co-founder of www.fromages.com. Ten years later with the words of Pierre Androuet hammering on my brain:

“Cheese is the soul of the soil. It is the purest and most romantic link between humans and the earth.”

I took pen and paper; many reams later with the midnight oil burning Tasting to Eternity was born and self published.

I believe cheese and wine lovers should be told about this publication.